FACE and the Safari Club International (SCI) together organised a dinner debate in the European Parliament on 16 October 2017. The subject of the debate was the Convention on International Trade in Endangered Species of Wild Flora and Fauna (CITES), with a focus on role of trophy hunting in conservation. The evening provided a lively debate on these topics among members of the European Parliament, the European Commission, representatives Zambia and Namibia and different stakeholders, including the leadership of SCI’s International Affairs and Development Committee, FACE, the Wildlife Conservation Society and CIC.

1 year after the 17th Conference of Parties (CoP) of CITES FACE and SCI brought together all the stakeholders in the European Parliament to discuss wildlife conservation and the role that CITES plays therein. At the last CoP, an important resolution 17.9 was unanimously adopted which recognizes that “well-managed and sustainable trophy hunting is consistent with and contributes to species conservation” and recommends that “Parties consider the contribution of hunting to species conservation and socio-economic benefits, and its role in providing incentives for people to conserve wildlife, when considering stricter domestic measures and making decisions relating to the import of hunting trophies”. 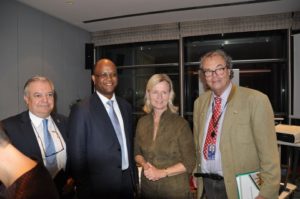 As was echoed at the dinner debate, this also creates responsibilities for hunters and other stakeholders that can sustainably conserve those natural resources. It is important for trophy hunting continues to create an impact on the ground. Namibia’s Community-Based Natural Resource Management (CBNRM) was presented as a perfect example of how the use of natural resources, through trophy hunting and/or other economic activities, can create tangible incentives for communities living with wildlife. In the end: the rural people living with the wildlife should be and are the custodians of the natural resources.

Sustainable use of natural resources has to go hand-in-hand with care for those same resources (e.g. see IUCN Briefing Paper on Trophy Hunting). Cooperation and understanding, between and among decision-makers and stakeholders, will become even more important in the future if we want to sustain trophy hunting and its positive role for conservation.