On 27 September 2021, the European Parliament’s Intergroup on “Biodiversity, Hunting, Countryside” hosted an online conference on Delivering the Nature Restoration Law for rural stakeholders and biodiversity, organised in conjunction with the European Landowners’ Organisation (ELO) and the European Federation for Hunting and Conservation (FACE).

The conference discussed opportunities and challenges for the ambitious European Commission proposal on binding restoration targets which aims at putting in place time-bound obligations for ecosystem restoration together with an overarching EU target. The aim is to cover at least 20% of the EU’s land and sea areas by 2030 with nature restoration measures, and eventually extend these to all ecosystems in need of restoration by 2050.

The opening message was delivered by MEP Álvaro Amaro, who underlined that: “The European Parliament has a key role to play as the institution reflecting most of the reality of the everyday life of land users through is direct link with citizens […] It is essential not to miss a ‘good start’ for this legislation and involve from the beginning the countryside community such as hunters, farmers, land managers, environmental groups, anglers and other interested stakeholders (like municipalities) in the planning process”.

MEP Noichl stated that: “We have a rapidly closing window of opportunity to secure a liveable future in the EU and the rest of the world. The EU commitments until now proofed to be a failure. Therefore, we cannot allow the nature restoration law to fail. Possible loopholes to water down our ambitions have to be closed. Because restoring nature is our best insurance policy for climate adaptation and thus also to preserve long-term food security in Europe”.

MEP Schneider said: “The European Commission’s proposal overshoots its objective and is too single-sided directed against agriculture and neglects the important aspect of food security. I will advocate sustainable farming based on the three pillars of sustainability – economic viability, environmental protection and social equity”.

MEP Vondra stated that: “I am still somewhat disappointed. There is not only the administrative burdens for Member States, but, above all, the risk that the burden of meeting the EU targets will not be shared fairly amongst Member States. We should also ask where we get the money for all the proposed measures at a time when dramatically rising energy prices and inflation are having a significant impact on our societies”.

Mr. Stefan Leiner, Head of the Natural Capital and Ecosystem Health Unit, European Commission, in his keynote speech highlighted that: “The Commission proposal breaks new ground. It is the first EU-wide, comprehensive restoration law of its kind and follows suit to the European Parliament Resolution on the EU Biodiversity Strategy for 2030 which called upon the Commission to develop a new law with legally binding nature restoration targets. All the scientific evidence, including the latest IPCC report, is clear: the biggest threats to food production and food security are climate change and biodiversity loss.  By restoring healthy and biodiverse ecosystems the law will help ensure the sustainable economic activity of those who directly depend on such healthy ecosystems for their livelihoods: farmers, foresters and fishers”. 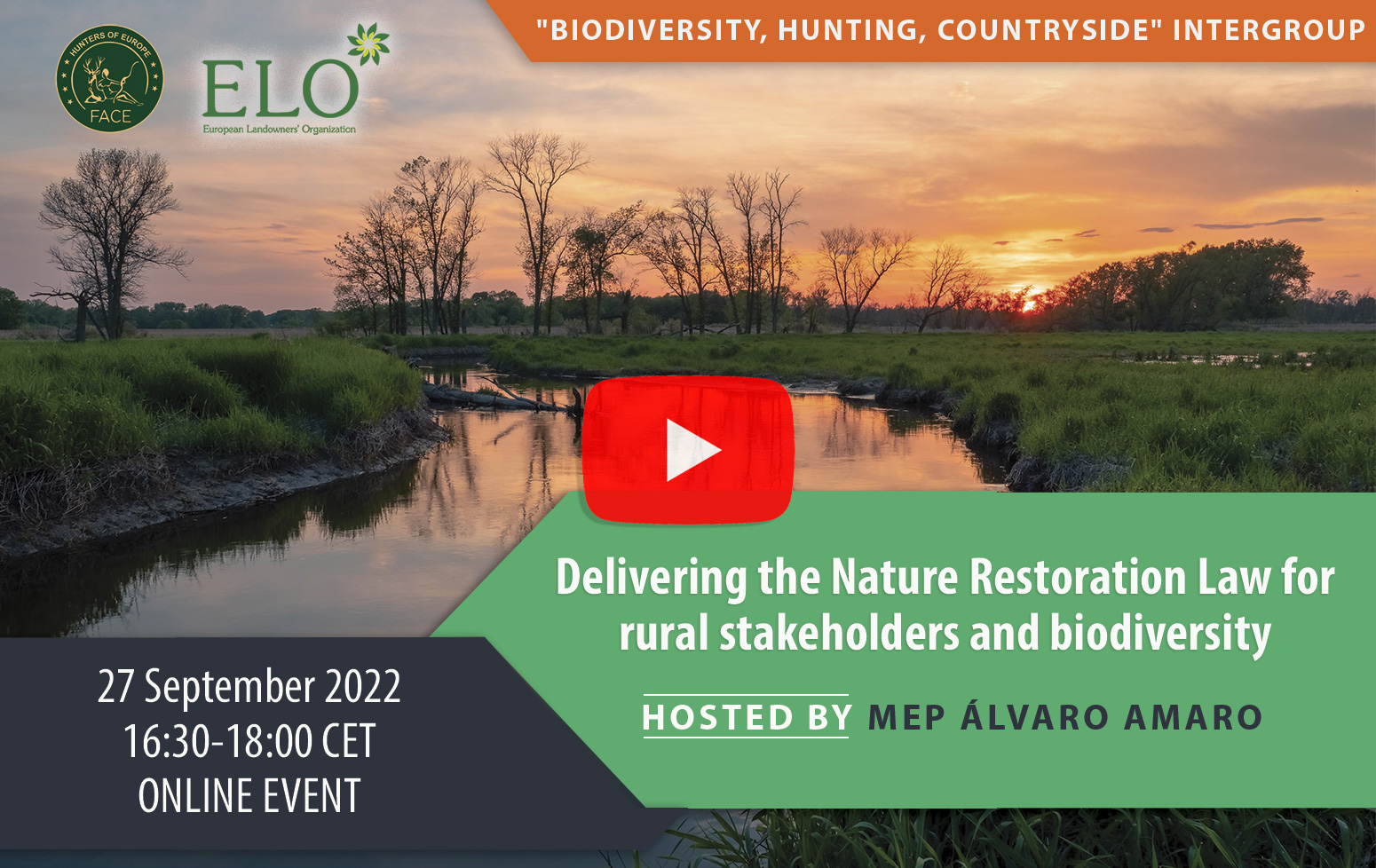 Ms. Annegret Larsen, Soil Geography and Landscape Research, Wageningen University & EGU Biodiversity Task Force, stated that: “As geoscientists, we are used to thinking on longer time scales. For us, it is clear that climate change and human impact have been and are at present the main driver of habitat transformation and biodiversity loss. We want restoration projects to focus on the recreation of ecosystem functions and establish win-win situations for biodiversity, climate protection, climate mitigation, and people”.

Mr. Ariel Brunner, Deputy Director and Head of Policy, BirdLife Europe and Central Asia, stated that: “A strong and rapidly implemented nature restoration law is at this point a question of survival. Not just for the many wild species in dire straits, but of our human society. Farmers, foresters, land owners and fishers are the most exposed to the ravages of climate change and ecosystem collapse. They have the most to gain from a serious restoration push”.

Mr. Max Freiherr Von Elverfeldt, President Familienbetriebe Land und Forst, stated that: “With the Nature Restoration Law, the EU chooses the wrong approach to achieve the right goals. Instead of the strict protection of forests and other areas, we need to strengthen sustainable management methods in order to promote biodiversity and climate protection. In the current situation, it would be a fundamental mistake to restrict European production of food and renewable raw materials, because production restrictions not only jeopardize European security of supply in a time of serious market disruptions and unpredictable global supply chains. They also inevitably lead to relocations of production to non-European third countries and thus to carbon leakage and to the export of environmental problems”.

With a high attendance of almost 300 online viewers, the meeting was moderated by Jurgen Tack, ELO Scientific Director, who also hosted a wide-ranging Q&A discussion.
Video recording of the meeting is available on the “Biodiversity, Hunting, Countryside” Intergroup’s website: Www.biodiversityhuntingcountryside.eu/#events