17 Feb 2021 Nature is under pressure, but not from hunting

Posted at 17:07h in Nature Conservation by FACE 2 Comments
Share

NATURE IS UNDER PRESSURE, BUT NOT FROM HUNTING:
Fact-checking the EU’s State of Nature report

Brussels, 17 February 2021 – Hunting is increasingly being referred to as a high-pressure driving species’ loss and habitat deterioration. This assumption stems from the latest EU State of Nature report where data are presented in a misleading manner, and infographics include headlines and pictures of hunters.

Thankfully, the source data for the EU State of Nature report are easily accessible. When looking more closely at the figures, a very different story appears. Hunting only accounts for 0.66% of all high-ranking pressures reported. In other words, Member States reported hunting as a high-ranking pressure for species and habitats in less than 1% of cases. 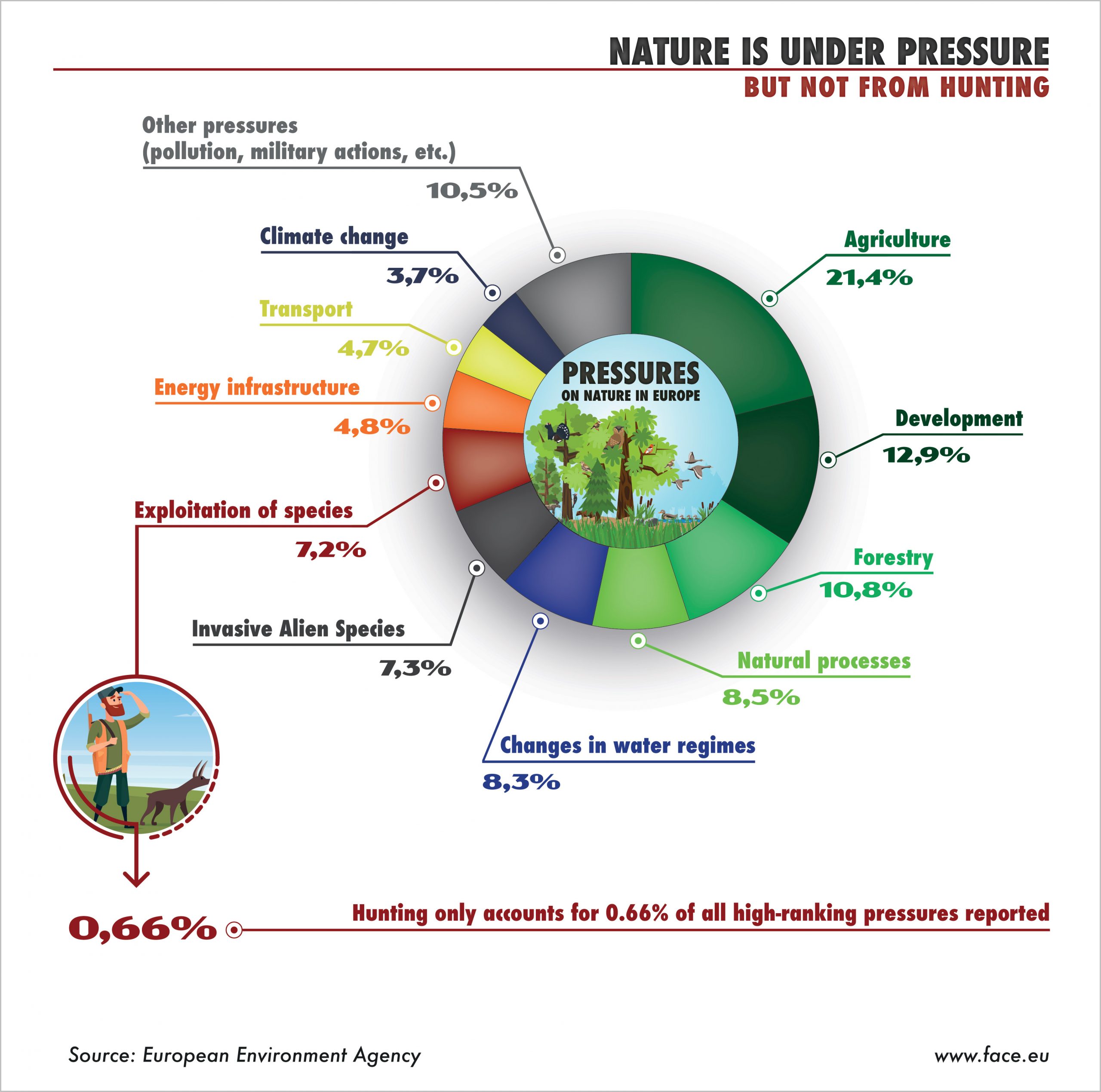 The share of hunting relative to all pressures reported by Member States varies depending on elements selected. The following categories are very revealing:

Hunting as a pressure on Habitats: 0,05% of pressures reported for habitats.
From a total of 5,596 reports on high-ranking pressures on habitats, there are only 3 reports by Member States of habitats under pressures from hunting.

Hunting as a pressure on birds: 2,58% of pressures reported for birds.
One of the main reasons why the media has jumped on hunting is because of the infographics used by EU agencies in the latest State of Nature report, which show picture of hunter in the context of high-ranking pressures on nature. 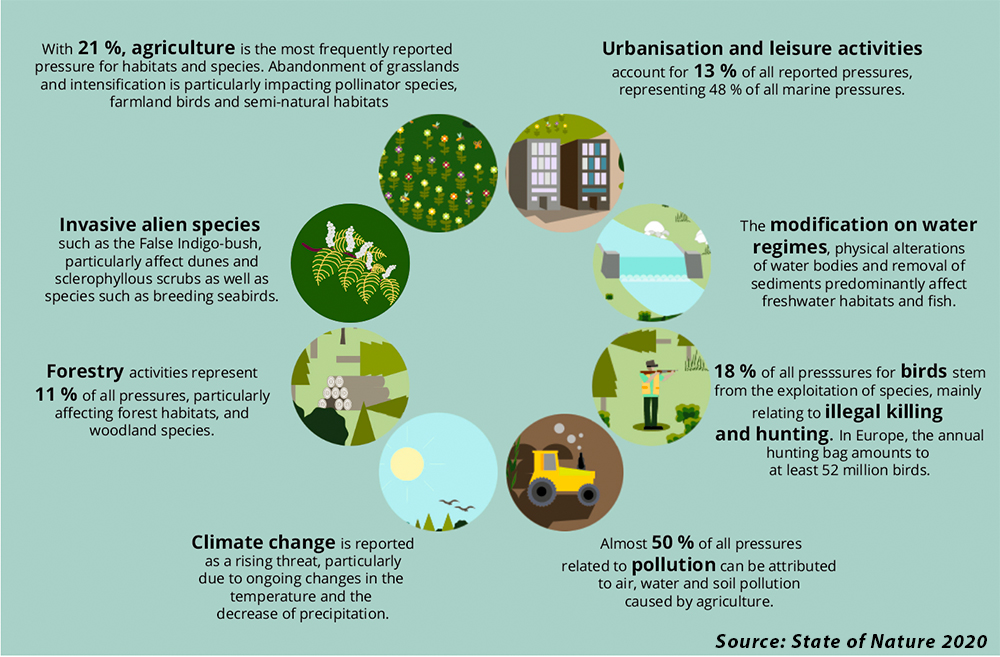 In the data gathered from Member States, pressures and threats on nature are structured into two hierarchical levels. Agriculture, forestry or climate change are in the first level, but hunting is one of many sub-categories under exploitation of species.

While it is not entirely clear how the figure of 18% relating to “illegal killing and hunting” is reached, the data show that for birds, hunting accounts for only 2.58% overall.

There are two problems with the infographic. Firstly, people may understand that the pressures from illegal killing and hunting (18% cited in the above infographic*) are much higher than e.g. forestry (11%). Percentages within a sub-category should not be presented alongside percentages of main categories. Secondly, grouping hunting and illegal killing together is not acceptable. Hunting is the legal pursuit of game whereas illegal killing must be considered separately as a criminal activity for which zero-tolerance is required (e.g. see link).

Which bird species are concerned?
There is a list of 86 species (from Annex I, II and non-annex birds) for which hunting was reported as a high-ranking pressure. The species most frequently reported were species in a secure population status and increasing or stable trends, the Greylag Goose (Anser anser) is on the top of that list closely followed by the Great Cormorant (Phalacrocorax carbo sinensis).

However, it is important to point out that this is in direct contradiction to EC’s Guidance on reporting where Member States were instructed not to report high pressures for species showing a secure population status and increasing or stable trends. If this advice had been followed, the outcome would be clearly different, lowering the relative share of hunting.

Why is this a problem?
Good conservation policy should be evidence-based. The State of Nature report is a major milestone providing a wealth of information to be used for implementing the Birds and Habitats Directives as well as the new Biodiversity Strategy. This information should be used impartially without jumping to conclusions or pushing political agendas.

Unfortunately, such misunderstandings have already been picked up by the media and used in ongoing dialogues. If policy makers are told hunting is a threat to biodiversity, it is understandable that they may act to restrict it. A primary example is the EC’s current proposals for “strictly protected areas”, which has sparked backlash by many stakeholders and MEPs (e.g. see link).

Responding to the unclear picture painted in several communications (e.g. see link, link & link), FACE’s Secretary General, Dr. David Scallan stated: “We’re delighted to clarify the situation following inaccurate communications and we hope that balanced reporting will follow. It’s important to look deeper at the data before headlines are developed and this also applies to EU agencies. Conservation works when people support it, so let’s focus on working with key stakeholders that have the ability to conserve nature on the ground”.

* Corrigendum 25/02/21:
Following exchange with the European Environment Agency, we can now clarify that 12.8% of all pressures on birds relate to the category “exploitation of species”, not 18% as stated. This category includes a list of 19 different pressures of which illegal killing features prominently, followed by hunting. All other figures remain correct.

Background information – What is the Member State ‘reporting’?
The nature directives (i.e. the Birds and Habitats Directives) require Member States to report on what they consider to be the principal causes of species loss and habitat degradation. They therefore report on pressures, that are factors considered to have affected habitats and species within the current reporting period, and threats, that are factors considered to be likely to have an impact during the subsequent two reporting periods. These pressures and threats are structured into two hierarchical levels, the first (level 1) comprises 15 overarching categories (e.g., agriculture or development), while the second (level 2) identifies 203 activities reported as pressures/threats. At the same time, they are ranked as being of either ′high′ or ′medium′ importance according to their relative impact. Our focus was on ′high importance′ pressures, given that the results for reported pressures and threats are largely consistent among the categories (State of Nature report, 2020).