23 Nov 2020 “Coexisting with Large Carnivores: Next steps in conservation and management”

On 18 November 2020, the European Parliament’s “Biodiversity, Hunting, Countryside” Intergroup held the high-level conference on “Coexisting with Large Carnivores: Next steps in conservation and management”, organised in conjunction with the European Federation for Hunting and Conservation (FACE).

The opening message from MEP Álvaro Amaro, which stressed the need to involve relevant stakeholders such as hunters, landowners and farmers at all levels in the decision-making process, opened a fruitful debate on large carnivores and the related challenges towards improving coexistence in the EU.

The return of large carnivore populations in Europe is a conservation success, but also raises multiple coexistence challenges. The Members of the European Parliament agreed the flexibility – as already foreseen in the Habitats Directives – should be more effectively utilised by Member States to ensure that social, cultural and economic conflicts can be better managed.

The panel of speakers expressed their expectations for the publication of the Commission’s revised guidance on “strict protection of species” to offer more clarity on how conservation and management priorities can be correctly applied towards achieving long-term coexistence with large carnivores in Europe’s densely populated and multifunctional landscapes. 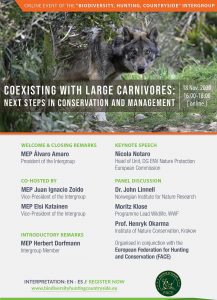 Nicola Notaro, Head of the Nature Unit, DG Environment European Commission, provided the European Commission’s perspective on this issue. He underlined that: “The Commission fully supports the coexistence between human activities and large carnivores. Experience from across Europe shows that this can be achieved on the ground when there is inclusive dialogue, openness to learn from others’ experience and to adjust current practices. Technical and financial support are essential for all those affected by the return of large carnivores to areas in which they had disappeared for a long time. The Commission will continue to make them available through EU funds (Rural Development, LIFE) and through EU as well as regional platforms on large carnivores that allow for information and best practice exchange”.

Dr. John Linnell, Norwegian Institute for Nature Research, stated that: “Coexistence between large carnivores and humans is one challenge! The other is achieving coexistence between different groups of people with different perspectives, interests and values on how we should manage large carnivores […] The solutions to the challenges of coexistence are both technical and political. However, politics can also be a large part of the problem when it instrumentalizes conflicts with carnivores for political gains and undermines expertise by creating an alternative universe of fake news and conspiracies. In such situations everybody loses, including carnivores and people, because we ignore the real challenges!”.

Moritz Klose, Programme Lead Wildlife Germany and Europe at WWF, stated that: “The return of large carnivores is a huge success story for nature conservation in Europe, but the story does not end there. The reality is that their distribution is limited compared to the original state and protection is still needed. When conflict arises, Member States have sufficient flexibility under the Habitats Directive to use derogations on a case-by-case basis. There is no scientific evidence that culling, including a steered hunting regime, is an effective solution to decrease damage to livestock. The focus must instead be on supporting livestock breeders to implement preventive measures such as electric fences and guardian dogs and to provide financial compensation in case of damages”.

With an exceptional attendance of more than 360 online participants, the meeting was moderated by Dr. David Scallan, FACE Secretary General, who also hosted a wide-ranging Q&A discussion.

Video recording of the meeting as well as speakers’ presentations are available on the Intergroup website: www.biodiversityhuntingcountryside.eu