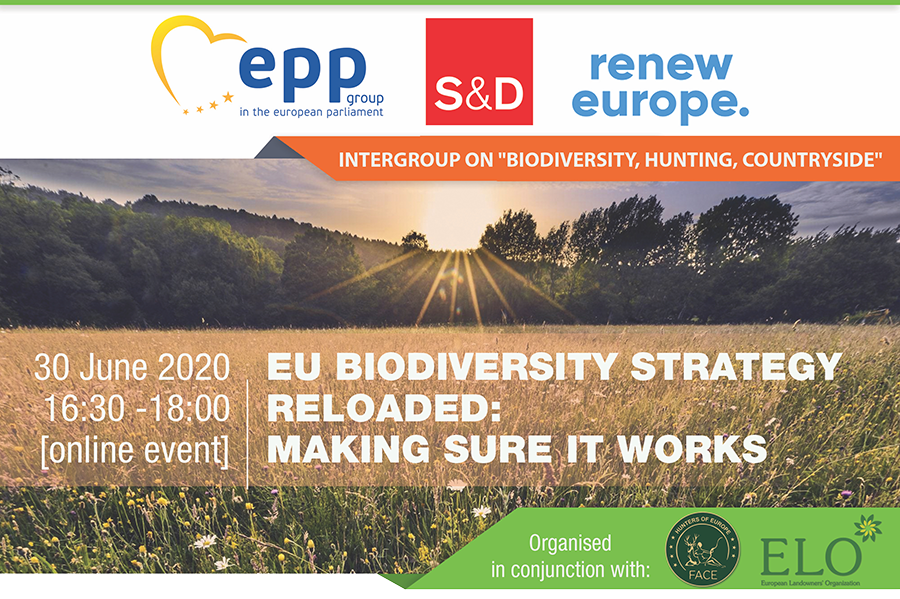 Posted at 17:23h in European Parliament by FACE 0 Comments
Share

MEP Amaro, who chaired the meeting, opened the discussion focusing on the opportunities and challenges for the ambitious EU Biodiversity Strategy to 2030, which was recently unveiled by the European Commission. The chairman of the Intergroup said: “The publication of the EU 2030 Biodiversity Strategy raises many questions, which need to be seriously analysed if we want to make the Green Deal a reality for all EU citizens. If the Strategy is ‘made for all’, as Commissioner Virginijus Sinkevičius stated in the last AGRI Committee hearing, then it will be crucial that rural stakeholders are considered as prime partners”. MEP Amaro added that “Europe’s farmers, land managers and hunters combat biodiversity loss every day, which has been an enormous challenge over the last decades in the EU. They run successful initiatives and establish valuable networks on the ground. Any strategy must include rural actors as part of the solution in order to succeed, especially when we come to discuss protected areas, which can often result in an extremely static vision of nature conservation”.

MEP Agius Saliba stressed the crucial contribution of hunters and land managers in halting biodiversity loss and reversing the decline of farmland birds and pollinators. He said: “Until now, the Natura 2000 Network has struggled to deliver visible results and needs better implementation, new innovative elements and better support from our local communities. The 5th report of the FACE Biodiversity Manifesto clearly shows that hunters together with other stakeholders such as public authorities, environmental NGOs, research bodies, landowners and farmers, are very active in the conservation of a wide range of habitats and species in Europe. In this respect, Natura 2000 requires hunters’ commitment in the form of monitoring, species management and habitat restoration”.

In a video message addressed to the conference participants, MEP Katainen confirmed the importance of the main objectives set by the EU Biodiversity Strategy to 2030 and the need to act now with practical solutions. She pointed out that “different circumstances at national level need to be taken into account to ensure a fair and balanced implementation. The Commission’s approach towards rural actors and rural businesses is quite narrow. If we want Europe to be a leading continent in the field of ecological sustainability, we need the social, cultural and economic pillars at the core of the debate. If we ask for ambitious environmental results from farmers, foresters, landowners, hunters and entrepreneurs, we need to allocate enough resources for them to operate, in order to successfully implement this strategy and reach concrete results”.

Humberto Delgado Rosa, Director for Natural Capital, DG Environment, European Commission, delivered a keynote speech and illustrated the points of major interest of the strategy. He underlined that: “No political agenda, including the EU 2030 Biodiversity Strategy, can be built based on negative messages only, a positive side of it is always needed. This is the essence of the EU Nature Restoration Plan: we can put nature back into our lives where we want it and where its services are more needed”.

Kim Friedman, Food and Agriculture Organization of the United Nations (FAO), underlined the need to involve stakeholders in the process of effective policy implementation: “Strengthening our relationship with nature is most likely to be effective when we engage the full complement of stakeholders in the establishment and delivery of plans — we need ‘all hands on deck’ to make transformative change a reality when delivering on the communities vision for biodiversity”.

Erik Gerritsen, Senior Policy Analyst at IEEP, said: “In Europe we have good evidence of conservation and restoration successes, but action must scale-up and be more effective to turn the tide. The renewed biodiversity ambition in the EU Green Deal and 2030 Strategy is a real opportunity for all stakeholders caring for a living countryside to join forces. But it must not be wasted again. EU institutions must take urgent steps to meet known investment needs, not only through dedicated nature funding but also better integration for example with CAP Strategic Plans”.

Jurgen Tack, Scientific Director at ELO, said: “Not taking into account economic viability and social equity, proved to lead to disappointing results. Qualitative and effective management should be at the centre of the 2030 EU Biodiversity Strategy and landowners should be the preferent partners. Since voluntary measures and contractual agreements have proven to be very effective, ELO recommends choosing a wide range of voluntary tools for the conservation of private land at EU level such as the ones analysed in the LIFE programme ‘Land Is For Ever’”.

With an exceptional attendance of more than 250 online participants, the meeting was moderated by Dr. Hilde Eggermont, Coordinator of the Belgian Biodiversity Platform. The event was organised in conjunction with FACE-European Federation for Hunting and Conservation and ELO-European Landowners’ Organization. Many Members of the European Parliament joined the conference.

Video recordings of the full conference and speakers’ presentations will be available soon on the website of the “Biodiversity, Hunting, Countryside” Intergroup.