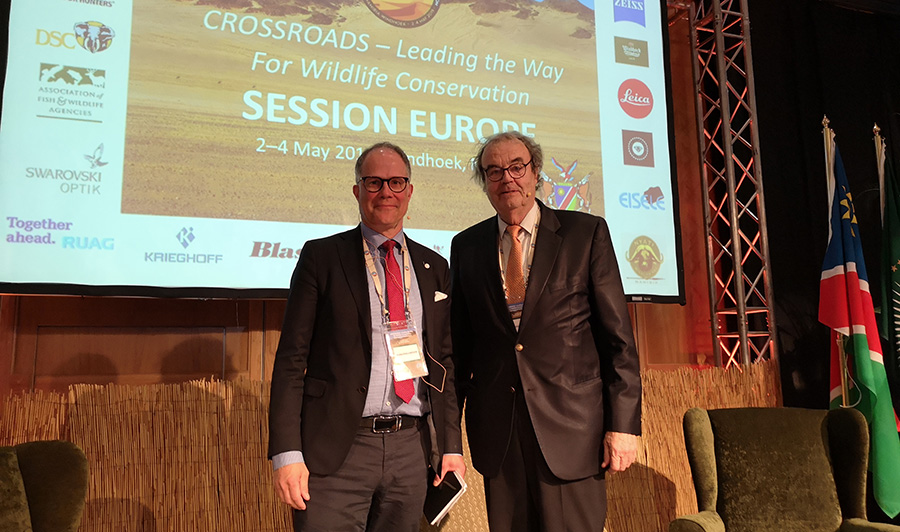 Brussels, 3 May 2019 – Today, FACE President Torbjörn Larsson presented FACE’s vision for conservation in Europe at the conference ‘Crossroads: Leading the Way for Wildlife Conservation’ organised in conjunction with the 66th CIC General Assembly on 2-4 May 2019 at Windhoek, Namibia. FACE represents the interests of 7 million European hunters through 36 national hunting organisations in Brussels.

Referring to the biggest driver of biodiversity loss in Europe, Torbjörn Larsson stated that hunters and national hunting associations are aware of the significant impact of agriculture and other land uses on many huntable species in Europe. He added that Europe’s hunters are particularly concerned about the populations of many small game species, which are declining dramatically. President Larsson highlighted how Europe, through its next Common Agricultural Policy (CAP), must dedicate more efforts for biodiversity, and especially small game species such as Grey Partridge, Brown Hare, Turtle Dove.

Another major topic for European hunters is the return of certain large carnivore populations. This is the result of successful conservation policy, but also brings conflicts. He stressed the need of greater flexibility regarding the implementation of the EU laws that should consider specific local, regional and national circumstances to reduce conflicts between people and large carnivores. President Larsson also explained that the protection status of certain populations of large carnivore species in the EU, like the Wolf and Brown Bear in some Member States can be changed, to enable pragmatic and efficient conservation strategies.

Torbjörn Larsson added that through its membership, FACE is currently active in raising awareness on these issues during the European Parliament elections. He stated: “FACE’s mission is to promote and protect hunting in Europe, mainly through the EU institutions. The decisions taken in Brussels have a decisive impact on the direction that Member States give to the environmental policies, and this has huge effects on hunting and hunters in Europe: 85% of the rules affecting the environment and hunting come from Brussels”.