Posted at 15:48h in Nature Conservation by FACE 0 Comments
Share

Worryingly for FACE, the European Commission’s (EC) Communication* on the next Common Agricultural Policy (CAP) does not acknowledge the biodiversity crisis on Europe’s farmland. Of significance, the EC has confirmed that next CAP will again include a two-pillar structure whereby farmers will receive area-based payments (under Pillar I), which may not effectively deliver public goods other than food. FACE was hoping for an improved CAP structure whereby direct payments to farmers would also be clearly linked to measurable environmental outcomes. While the current CAP includes a voluntary ‘greening’ payment, most of the evidence shows that this has been ineffective, and it remains unclear as to what the next CAP will offer in this regard.

Regrettably, it is abundantly clear from the Fitness Check of the nature directives, that the implementation of EU nature policy at national level has been very ineffective. How then can we be sure that Member States will prioritise much needed action to improve biodiversity in the delivering the CAP? Voluntary agri-environment schemes under Pillar II have, in general, been unsuccessful apart from some examples, such as locally-led and results-based schemes in some parts of Europe. What is more worrying is that there is no mention of a new instrument to fund nature conservation, which hinders the opportunity for the next CAP to ensure much needed policy coherence.

The Communication does not propose how direct payments (under Pillar I) will be effectively “simplified and better targeted”, in particular, for those farmers maintaining the most biodiversity-rich (and often Natura 2000 designated) landscapes. How will these farmers be appropriately supported to ensure the current land abandonment problem is reversed? For FACE, the EC’s communication does not effectively address this issue.

The EC’s Communication also proposes a ‘delivery model’ with a more flexible approach to guarantee effective results but it states that: “Member States should bear greater responsibility and be more accountable as to how they meet the objectives and achieve agreed targets”. In this context, Member States would be accountable for “providing credible performance monitoring and reporting, underpinning the assurance of the budget”. For FACE, this is where European agriculture could fail to deliver on its biodiversity goals again.

Further, FACE also notes the use of the problematic term “environmental care” in the EC’s Communication. It remains to be clarified whether this means ‘caring’ for Europe’s remaining depleted farmland habitats and species instead focusing on restoration? 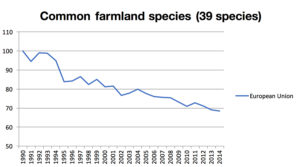 While it is welcome that the Communication notes that the next CAP must have a “strong commitment to deliver public goods and ecosystems services related to soil, water, biodiversity, air quality, climate action and the provision of landscape amenities”, many open questions need to be answered such as:

How will this be achieved in a strategic and measurable way?
What if Member States do not define quantified targets to ensure that these agreed environmental and climate objectives are met?
What if Member States do not choose to prioritise the delivery of environmental goals at national level?
What if Member States or the EC fail design adequate compliance and control frameworks?
What if the proposed “CAP strategic plan” does not sufficiently oblige Member States to ensure policy coherence?
According to Ludwig Willnegger, FACE Secretary General: “FACE is deeply concerned that this proposal may lead to Europe’s 7 million hunters seeing further declines and extinctions in small game populations and other non-huntable species. Now the Commission has considerable work to do to demonstrate how the next CAP will deliver results in the field so that some of the ambitious points in the Communication become reality”.

* In February, the European Commission (EC) launched a major consultation on the future of the Common Agricultural Policy (CAP). FACE replied calling for a more sustainable CAP that addresses the biodiversity crisis on Europe’s farmland, which is affecting the status of many huntable and non-huntable species. Over 250,000 citizens and 600 civil society organisations called for a more sustainable CAP post 2020. Last week, the EC published its Communication outlining on what the next CAP will look like.