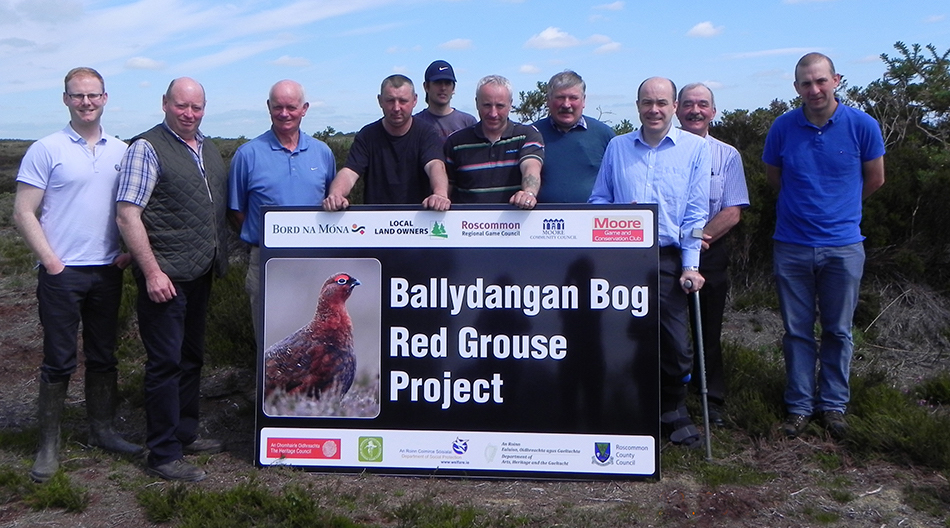 Posted at 13:00h in Nature Conservation by FACE 0 Comments
Share

The Ballydangan Bog Red Grouse Project, Co. Roscommon started in 2009 because members of Moore Gun Club wanted to do something about the ever-decreasing numbers of Red Grouse on raised bogs in the region. After some initial support from Roscommon Regional Game Council, a professional conservation plan was developed. From there, the National Association of Regional Game Councils (NARGC) provided support along with several other stakeholders including Bord na Móna and other important government agencies started backing the project.

Today, the project’s driving machine is the community employment (CE) scheme staff, which is managed by Moore Community Council and financed through the Department of Social Protection. This team carries out the core on-site project work, which is mainly habitat and predator management along with grit provision and disturbance control. Members of Moore Gun Club support the CE staff though monitoring the status of the Red Grouse on the site and assisting with predator management in the wider area. Bord na Móna plays an active role in providing advice and raising awareness about the project with universities, schools, and other groups interested in setting up similar projects.

In recent years, one of the wider benefits of the project has been the arrival of several pairs of breeding Curlew. This is significant as this bird has declined by over 90% since the 1980s. The success of the breeding Curlew on Ballydangan attracted RTE’s (main Irish TV broadcaster) Eco Eye team to the project earlier this year where Moore Gun Club’s Pat Dunning did an interview about the why the project started, how it works, and the plans for the future.

On Thursday, 19 October 2017, the project reached its finest moment – a visit from two Irish Government Ministers – Heather Humphreys, Minister for Culture, Heritage and the Gaeltacht and Denis Naughten, Minister for Communications, Climate Action and Environment. Both Ministers visited the project site before meeting the project team and delivering speeches in Moore hall. Minister Humphreys applauded how this small-scale community-based project has become one of Ireland’s best practice demonstration sites, which is now a leading example of how to manage raised bogs for Red Grouse and breeding Curlew – both highly threatened birds in Ireland. She added that projects like this are turning the tide on how we think about Ireland’s last remaining raised bogs. Minister Naughten, who is no stranger to the project, said that the Moore community shows us that anything is possible when it comes to solving key conservation problems at the local level. On this point, he congratulated the project for its dive, its professional organisation and its inclusive approach to working with local schools, universities and other advisory bodies through the country.

Going forward, the project aims to continue to lead the way in conserving the remaining Red Grouse and breeding Curlew on Ballydangan Bog. This will be achieved through on-site management, education and awareness raising, and most importantly through the good will and support of the Moore community.

Visit our new website at www.ballydanganbog.com for more information!