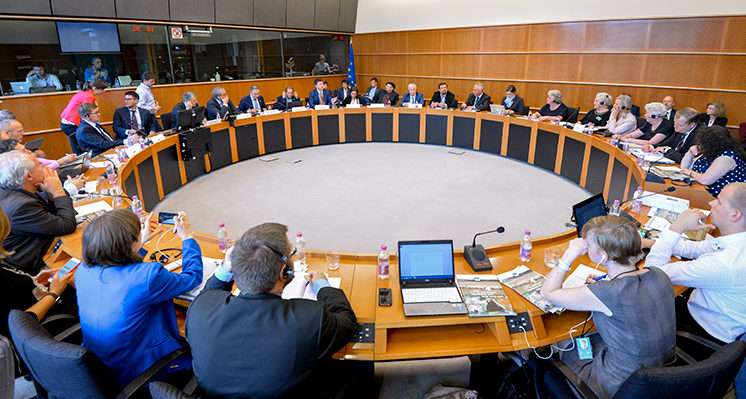 Much more effective measures need to be implemented now to mitigate the increasing conflicts between humans and large carnivores in Europe. This was the main message emerging from the conference “Coexisting with Large Carnivores: Challenges and Solutions” on 17 October 2017, at the European Parliament in Brussels.

The conference was hosted by MEP Karl-Heinz Florenz, EPP Group, President of the European Parliament’s Intergroup on “Biodiversity, Hunting, Countryside” and organised by FACE, the Federation of Associations for Hunting and Conservation of the EU. Current management and damage compensation schemes need to deliver suitable solutions for coexistence with regards to the increase of many large carnivore populations in Europe’s densely populated and multifunctional landscapes.

MEP Karl Heinz Florenz stated that: “The coexistence between human activities including agriculture, nature conservation and tourism with certain large carnivore species such as the wolf, presents us with ever increasing challenges: the return of wolf has sparked substantial debate, especially in Europe’s populated rural areas. Therefore, I am asking that we develop good management plans for wolves and other wild animals that cause conflicts. Not only ecological, but economic and social factors must be taken into account. We have to address the issue objectively while seriously considering the concerns of many farmers and landowners. We need to better involve affected farmers, landowners, hunters and foresters on the ground in the decision-making process”.

Dr. Nicola Notaro, Head of the Unit Nature protection of DG Environment, focused on the fact that large carnivores are an integral part of ecosystems and landscapes across Europe, and the key approach to managing conflicts between human interests and the presence of large carnivore species is to develop a constructive dialogue with stakeholders, farmers, hunters and institutions. This dialogue should include the exchanging of knowledge, working together and using the tools provided within the current EU legislation and policy, which are flexible enough to be adapted to different contexts and geographical areas. He referred to the EU Action plan for nature, people and the economy as a means to achieve these actions.

Mr. Csaba Borboly, Member of the Committee of the Regions and President of Harghita County Council in Romania, reported on the development of a report within the Committee of the Regions focused on improving coexistence between people and large carnivores. From his own region, he described the conflicts generated by the Brown Bear in Romania. He referred to the recent restriction on harvest quotas as being problematic. He further stressed the need for Romania to use EU funds for Natura 2000 areas and to improve coexistence as well as the need to support science-based approaches to decision-making.

According to Mr. Daniel Heindl, from the Lower Austrian Chamber of Agriculture, traditional grazing and pastoral farming have become extremely difficult in some areas. He called for conflict free areas, in particular, in areas with extensive livestock grazing in Alpine regions of Europe. He argued that traditional alpine pasture farming, which has grown over the centuries, is an ecological and cultural asset of the Alps and must be maintained in the future, without elaborate protective measures.

Mr. Luis Suarez, WWF Spain, referred to several examples of good coexistence between people and large carnivores. He stated that conflicts can be solved and referred to a wide range of preventative measures and stressed the need for good stakeholder collaboration. He demonstrated how the EU LIFE funding instrument and national rural developments funds can be successfully used to improve coexistence between people and large carnivores.

The conference was attended by several Members of the European Parliament, who actively participated in the discussion, such as Bendt Bendtsen (Denmark), Annie Schreijer-Pierik (Nederlands), Renata Briano and Herbert Dorfmann (Italy), John Stuart Agnew (UK), Stefan Eck (Germany) and others.