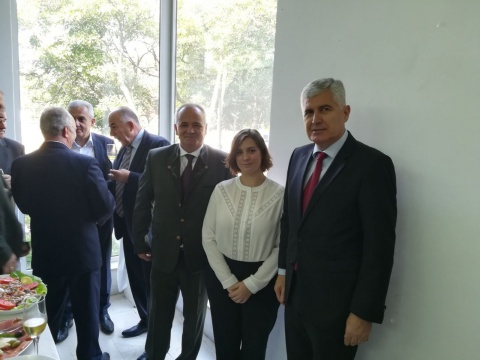 On 14 October 2017, FACE participated in the 25th Anniversary celebrations of Lovački Savez Herzeg Bosne, one of the FACE Members in Bosnia and Herzegovina, at the invitation of the Association’s President, Slavko Marin, and Secretary General, Ivica Lučić. The celebrations took place in the city of Mostar. The event gathered close to 300 people, including representatives of the country’s hunting associations, the Chairman of the Presidency of Bosnia and Herzegovina, as well as one CIC Vice-President.

FACE gave a television interview and delivered a speech on this occasion, highlighting the importance of the cooperation between the European Federation and its Members. The celebrations were a good opportunity to reinforce the collaboration between our associations, as well as to demonstrate FACE’s support to Lovački Savez Herzeg Bosne. Furthermore, it was an occasion for FACE to get better acquainted with the interests and issues in the region.

FACE is gratified that the Association has been a FACE Member for almost 15 years.

Related Page:
About our Members