On 6-7 September, FACE celebrated its 40th anniversary in Brussels. The event coincided with FACE’s annual General Assembly, a high-level conference in the European Parliament and an exhibition on involving young hunters in nature conservation. In attendance was the Environment Commissioner, Karmenu Vella, the Agriculture Commissioner, Phil Hogan, numerous Members of the European Parliament, representatives from European Commission as well as the delegations of European hunting associations and a wide range of other stakeholders.

Sustainable hunting is a positive force for conservation! This was one of the messages delivered by Environment Commissioner, Karmenu Vella, at the conference “Young Hunters: Securing a future for Europe’s biodiversity” on 6 September 2017 at the European Parliament. The Commissioner also pointed to the value of the FACE Biodiversity Manifesto to demonstrate how Europe’s 7 million hunters contribute to delivering the goals of EU Biodiversity Strategy 2020. With a focus on young hunters, this conference also debated the future of hunting in an increasingly urbanised world. 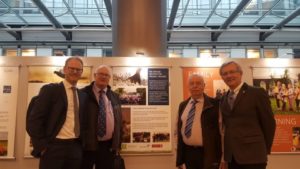 A parallel exhibition in the European Parliament – “Young Conservationists” – showcased in a visual way how European hunting associations reach out to and actively engage with young people in promoting hunting and conservation. Informative panels from different European countries and video documentaries displayed a wide array of conservation projects which focused on education and awareness in promoting wildlife management and community-based conservation. 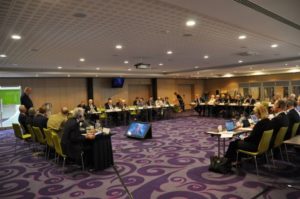 On the 7September, FACE organised its General Assembly. The meeting was opened by the EU’s Agriculture Commissioner, Phil Hogan, who stressed out the importance of the collaboration between hunters and farmers in the debate about the next Common Agricultural Policy (CAP). The heads and the delegations of European hunting organisations also agreed on FACE’s work strategy.

The FACE Secretary General, Ludwig Willnegger, presented the Work Plan for 2018, focusing on themes such as the CAP, improving communication, European hunters’ contribution to implementing the Nature Directives and the EU Action Plan for nature, people and the economy, with a focus on migratory birds and large carnivore conservation and management.