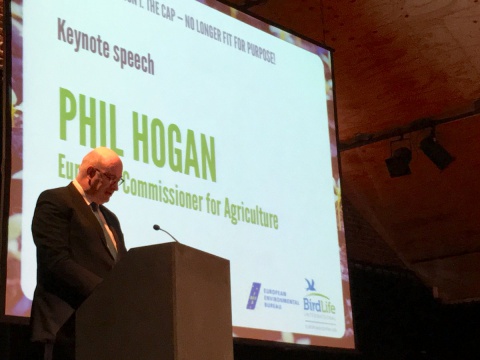 Posted at 08:20h in Nature Conservation by FACE 0 Comments
Share

FACE was present at a conference on the reform of the Common Agricultural Policy (CAP). The CAP is a major policy in Europe and currently uses the largest portion of the European Commission’s (EC) budget (almost 40%). It has resulted in major improvements in food production since its conception in 1957, however, there is recognition that the future CAP to be more sustainable. For FACE, the decline in farmland biodiversity, especially (huntable) small game species, is a very important subject.

At the conference, Commissioner for Agriculture and Rural Development, Phil Hogan, stressed that the CAP is not broken; what it needs is incremental change. He focused on the importance of the CAP for food production, but he also said that the CAP now needs to deliver more for the environment. This is also part of the EU’s international obligations (e.g. the Sustainable Development Goals [SDGs] and Paris Climate Agreement). In his speech, he was very clear about the debate on food production:

“But let us be clear: we are talking about production! And with a rising world population and a higher demand for primary products for the booming bio-economy there can be no talk about less or reduced production.”

He also focused on smart growth, cooperating more with the food industry to create a circular economy and above all, a simpler CAP not only for farmers, but for all stakeholders. Although the farmers are the central actors, Commissioner Hogan wants to include the totality of rural actors into the policy.

Daniel Calleja Crespo, Director-General for Environment, was also present to comment on the CAP. He envisioned a more coherent CAP with a focus on environmental needs. He stressed the need to link the CAP to the Action Plan for nature, economy and people, but also to international agreements like the SDGs. He stressed the importance of receiving buy-in from multiple groups: farmers, consumers and local/regional authorities. He called for a need to move from ‘good intentions’ to ‘solutions’. For the environment, this could be based on innovation, nature-based solutions and new agro-ecology techniques.

FACE is involved in the process to revise the CAP; we have provided input into the first round of consultation and issued a press release. We have also been involved in the production of the Action Plan for nature, economy and people: See our input for the consultation on the fitness check and the press release. Because farming and farmland biodiversity are strongly linked, FACE will continue its work on these important subjects. But we are not alone; a lot of European hunters are also involved in promoting conservation at the local level. View our new Biodiversity Manifesto website for a sample of projects where hunters are involved in nature conservation in Europe.