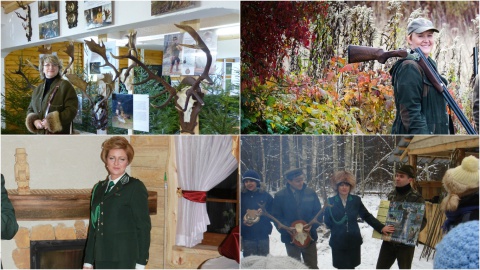 21 Dec 2016 THE DIANA CLUB OF THE POLISH HUNTING ASSOCIATION

Posted at 10:29h in Women Hunters by FACE 0 Comments
Share

The Diana Club of the Polish Hunting Association (Polski Związek Łowiecki) was created in March 2014 in order to improve the image of hunting in Poland, exchange hunting experiences and elaborate on educational activities from different perspectives. It has 141 members and represents almost 3% out of the total number of active women hunters in Poland (there are currently 3244 women hunters in this country).

The members of the Diana Club participate in shooting competitions and hunting dog trials, but they also carry out educational activities in primary and secondary schools. Women hunters play an important role in their hunting districts because they participate in the management processes regarding the economic aspects of hunting: for instance they estimate game damages.

In addition, the Diana Club also organises annual workshops and participates in the “Hubertus” hunting fair where women hunters present their daily activities concerning the activity of hunting.

Alicja Milewska, a journalist who started hunting at the age of 38, is the founder and president of the Podlasie–Bialystock District of the Diana Club and she is also a member of the Regional Council of Hunting in Bialystok. She organizes workshops, exhibitions, seminars, film screenings and meetings about the culture and tradition of hunting focused on children and adolescents. Alicja, who believes that hunting is mainly a contact with nature, wrote the book “Diana – Goddess of the hunt”, which was presented during an international symposium that took place in the Knyszyn Forest on 3-4 September 2016 about the role of woman hunters over the centuries. This is a fragment from her book: “The fact that women have always hunted, we have countless number of irrefutable evidence, and one of them is even the oldest information hunts have survived to our times or cave paintings discovered, a others, France and Spain, dated to the period epipaleolit and neolithic. One of them is deer-hunting couple – man with a bow and a woman holding hands, which can be read as a symbol of unity and equality”.
Aleksandra Dzięcioł-Gęsiarz, a 35 years old woman hunter from Sosnowiec, works at the Polish Hunting Association. She is a member of the Katowice District of the Diana Club, where she teaches hunting and conservation ethics to children and adolescents in schools. She states: “I am a hunter because it is a part of my family tradition. I am also aware of the management of animal populations; this is one of the ways of action to protect nature”.
Monika Gałwa, from Czestochowa, is a 39 years old teacher who has been hunting for the last 20 years. She states: “nature is my passion; I really enjoy observing animals’ life in the nature”. She goes hunting once per month with her children and her dog, and participates in the educational activities of the Diana Club.
Hanna Kozieja Maleńczyk, a pensioner from Zalesie Górne and member of Diana Club too, has noticed that: “women’s participation in hunting has substantially increased. Women hunters are mentally strong, creative and they operate in various fields: education, shooting and breeding/training of hunting dogs”. Besides helping to restore habitats, she hunts for three reasons: to be in close contact with nature; to influence wildlife conservation and nature’s balance; and to have a healthy diet.

If you want to be the next one to appear on www.face.eu, please answer to our questionnare here http://bit.ly/2aDO9pH