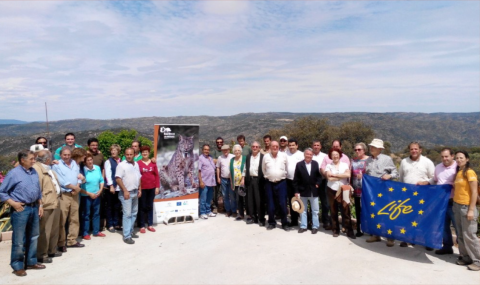 13 Jul 2016 THE PROJECT OF THE MONTH: RECOVERING THE IBERIAN LYNX IN SPAIN AND PORTUGAL

Posted at 14:18h in Nature Conservation by FACE 0 Comments
Share

Spanish and Portuguese hunters participated in the successful project LIFE+IBERLINCE, which has tripled the number of Iberian lynx in only one decade from less than 100 individuals in 2002 to more than 400 in 2015.

LIFE+Iberlince has been running from 2011, and will finish in 2017; there have also been three other previous Life projects since 2002. The current project, “Recovery of the historical distribution of the Iberian lynx (Lynx pardinus) in Spain and Portugal”, was set up by the Government of Andalusia with the collaboration of approximately 20 public and private stakeholders. The Iberian Lynx was one of the most endangered wild cat species in the world, but nowadays, after four consecutive projects, the IUCN has lowered its threat category from ‘critically endangered’ to ‘endangered’

The project, supported by the European Commission’s LIFE fund (LIFE10 NAT/ES/570), aimed not only to stabilise the Iberian lynx populations in Spain and reduce the risk of extinction but also to develop a comprehensive strategy for the conservation of the species. To achieve this, the Government of Andalusia, in collaboration with the governments of Extremadura, Castilla La Mancha, Murcia and Portugal, carried out different actions together with landowners and managers of private hunting estates such as captive breeding as well as the reintroduction of specimens into the wild. The project also carried out habitat improvements in order to support lynx’s main prey (rabbits).

The design and execution of these initiatives has relied on the close collaboration of all relevant public and private stakeholders: In total, 205 private owners, managers and hunting clubs have signed stewardship agreements and voluntary contracts in six Natura 2000 sites. The main goal has been to reduce hunting pressure on rabbits and to secure lynx-friendly land management practices across more than 194,000 hectares. In addition, three Andalusian hunting associations participated in the project accomplishing actions such as the creation of a special section about threatened species and lynx conservation as part of the courses to obtain hunting ranger licenses. They also provided information about lynx conservation issues for hunters to ensure compatibility with hunting practices.

Thanks to all this actions, at the end of 2015 there were 404 individuals of Iberian Lynx spread out along the regions of Andalusia, Badajoz, Toledo and Portugal too. In fact, each protected area included in the Natura 2000 network in Spain has already success reproductions in the wild.

In May 2016 the Government of Andalusia has been rewarded with the coveted “European Citizens’ Award” of the 2016 Natura 2000 Award. This honor, together with the collaborative work established through the project, will ensure that this important work supported by Natura 2000 continues in the future.

FACE encourages its Members to apply for the Natura 2000 Award. See here: http://ec.europa.eu/environment/nature/natura2000/awards/how-to-apply/index_en.htm