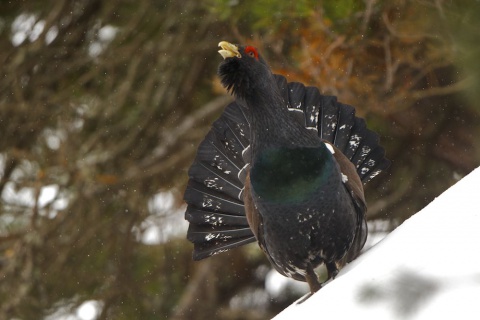 Posted at 14:40h in Nature Conservation by FACE 0 Comments
Share

Hunters team up with public bodies responsible for state forestry services in Poland in order to preserve the country’s capercaillie population.

In the provinces of Dolnoslaskie in Poland’s South-East, and Podlaskie in the North-West, populations of capercaillie (Tetrao urogallus), the largest member of the Grouse family, are in decline. At the beginning of the 20th century there were more than 3000 capercaillies living in Poland, however recent population estimates put the current figure at 350-450 individuals. Shrinking populations of wildlife present multiple problems for conservation, as not only does the number of birds decrease but so does the amount of their genetic variation, making it less able to adapt to changing conditions and increasing the chances of having less healthy chicks.

To reverse this population decline, Nadleśnictwo Ruszów and Nadleśnictwo Głęboki Bród, two public bodies responsible for state forestry services in these provinces, teamed up with local hunters in 2012. With the support of the European Commission’s LIFE grant (grant LIFE11 NAT/PL/000428), Polish hunters and state foresters began a six year conservation project focusing on managing species and habitats, data collection and education in Bory Dolnośląskie Forest (Dolnoslaskie province) and Augustowska Primeval Forest (Podlaskie province). The goal of this project is to restore vestigial lowland populations and to reach the target population density of 2 individuals per 1000 hectares which is recommended for these areas.

To achieve this, the capercaillies’ populations and habitat were monitored. A detailed analysis of the causes for the decline indicated that high predation pressure was preventing the population from recovering. As a result, the local hunters began an extensive effort to reduce the populations of capercaillies’ predators, targeting foxes, raccoon-dogs, martens, badgers, American mink and raccoons. Hunters also inventoried all burrows, whether occupied or not to map predator populations.

Other conservation actions included: reducing the level of anthropogenic impact in the habitats, improving capercaillies’ habitat and releases of reared birds to supplement the population. The project was also promoted via environmental education which included organising seminars, holding training sessions for local inhabitants, issuing publications on capercaillie ecology and biology, creating a 20 minute documentary about the species and the project, and others.

LIFE funding for the project continues until 2018, at which point the results of the project will be assessed.